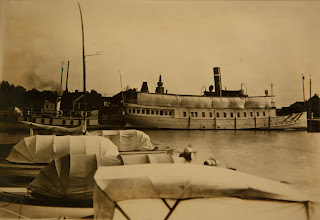 Einar Gustafsson s photo of the harbor of Västerås a summer day in the early twenties
has,like so many of his images a peaceful,solemn character, which makes his early work unusual and challenging.I have often considered whether it would be possible to write a story based on these pictures,made on a box camera by a very young man.

http://einargustafsson.tumblr.com/
Posted by Lars Gustafsson at 1:01 AM