Posted by Lars Gustafsson at 1:24 PM No comments:

A not quite regular octaeder from my workshop 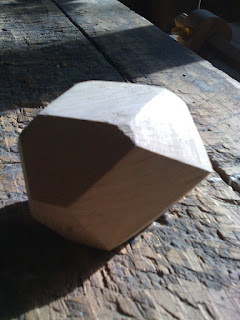 Posted by Lars Gustafsson at 7:20 AM No comments:

From my Workshop VI:Bikers in an Uncertain Part of the Race 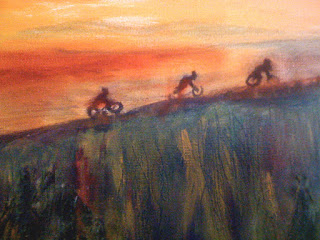 "Cyklister i en oklar del av loppet" was a line in one of my early poems. The realization of how late it actually is in my life inspired to this painting,or rather sketch, in the summer of 2009.It was left in the wood workshop on Mrs Blomqvists Säm, which is actually a little too dark for normal painting for two summers and winters - in a rather sketchy condition.

This summer I brought it out into the light of another work-shop and found that I liked the drama of it.I increased the information content of the foreground and warmed up the evening sky with a rather sentimental light - on the boarder but not beyond -the too sentimental.And I found that I had a painting.

A friend observed,quite correctly,that the emotional atmosphere reminds somewhat of the work of Hans Ylander,a sparkling Swedish painter with a very small production who died a few years ago.The melancholy is the same.

Life can - among other things be seen as a race.Against all sorts of slopes and gravity,and with a completely unclear motivation.So the three bikers in the painting are may be ridiculous in their blind zeal,but not completely .

Arthur Schopenhauer would have said:they are one of the Will s manifestations and neither more nor less real than that mysterious Will which permeats all of existence.

For further information on my pictorial work,consult :

(The wave and some other of my best works available)

Posted by Lars Gustafsson at 9:00 AM No comments:

Posted by Lars Gustafsson at 6:09 AM No comments: